Communications Services Qld take great pride in being able to support the community of Queensland whenever possible.

One of our biggest contributions to the community came in the support of the entire company workforce contributing to the clean up of the 2011 Brisbane floods, and restoring power to effected homes.

The following is an article written in the BICSI Global news magazine in 2011.

Early this year, flooding in eastern Australia that began in late 2010 took a turn for the worse, causing rivers to rise in Brisbane, Queensland, the countries third largest city. The flood forced people to flee both suburbs and skyscrapers, and hundreds had to be rescued by helicopter as almost 20,000 homes in low-lying areas were completely swamped when the river broke its banks. An estimated 60,000 homes and businesses were left without power.

Watching reports on the effect of the floods, local BICSI member Glen Parker, owner of Communications Services Queensland (CSQ), wondered what he could do to help. While Parker wasn’t the personally affected by the floods, he knew many people who were and decided to commit the services of his company to helping the flood victims.

“I could see the hopleseness on the faces of people being interviewed on the TV news,” said Glen. “You could see how mentally and physically fatigued they were as they returned to their ruined homes as the flood water receded. “

After seeing the reports, Parker sent text messages to his staff, instructing them to meet at the home of Nathan Spencer, sales manager of B&R Enclosures, a supplier of cabinets and equipment racks to CSQ. His home was severely affected by floods. Parker then informed his clients that CSQ wouldn’t be available for any work that day because the entire company would be helping flood victims.

“Early Monday morning, our 17 vans and 30 staff pulled up outside Nathan’s house amongst the debris,” recalls Glen. “We set up teams and went knocking on doors in the neighborhood, offering to check electrical and communications systems in attempts to make the houses safe and assess what it would take to get them nack on line.”

After checking switchboards, a new RCD (safety switch) and power outlet were installed in each board to provide householders with safe power for lighting, tools and equipment needed to assist them with the clean up. Documentation was submitted to the electrical utility, who arranged for technicians working nearby to reconnect the grid, essentially following the CSQ team in connecting houses. 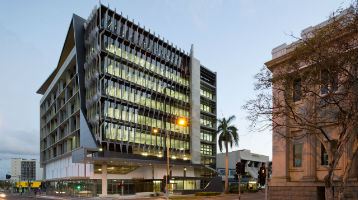